The Atlas of Human Infectious Diseases provides a much needed practical and visual overview of the current distribution and determinants of major infectious diseases of humans. The comprehensive full-color maps show at a glance the areas with reported infections and outbreaks, and are accompanied by a concise summary of key information on the infectious agent and its clinical and epidemiological characteristics. Since infectious diseases are dynamic, the maps are presented in the context of a changing world, and how these changes are influencing the geographical distribution on human infections.

The result is a concise atlas with a consistent format throughout, where material essential for understanding the global spatial distribution of infectious diseases has been thoughtfully assembled by international experts. Atlas of Human Infectious Diseases is an essential tool for infectious disease specialists, medical microbiologists, virologists, travel medicine specialists, and public health professionals.

The Atlas of Human Infectious Diseases is accompanied by a FREE enhanced Wiley Desktop Edition – an interactive digital version of the book with downloadable images and text, highlighting and note-taking facilities, book-marking, cross-referencing, in-text searching, and linking to references and glossary terms.

“I would definitely recommend the book to anyone interested in, or working within the field of infectious diseases and public health, as an invaluable asset to their collection.”  (The Bulletin of The Royal College of Pathologists, ۱ July 2013)

If you’re interested in infectious diseases and you like maps, you’ll love leafing through the Atlas of Human Infectious Diseases. It shows the global distribution of more than 110 diseases, from well-known scourges such as malaria and cholera to oddballs like strongyloidiasis and O’nyong’nyong virus disease. Maps have been available for many diseases, but, Wertheim notes, it’s often unclear who made them or what data were used – and they frequently contain errors.

Wertheim (a clinical microbiologist working in Hanoi for the Wellcome Trust and Oxford University) didn’t want an electronic atlas but a book you can draw inspiration from as you read it on the couch. The editors took five years to prepare the maps, sifting through data from countless papers, field reports, and other sources. Each map was reviewed by two experts for its particular disease. The atlas also charts underlying factors such as water and sanitation, international travel, and urbanization.

Infectious diseases are nothing if not dynamic, and freely accessible updates will appear on a forthcoming companion website. Meanwhile, Wertheim hopes that the gaps in the maps will inspire researchers to collect more data on where pathogens occur. For many diseases, Africa is epidemiology’s terra incognita—as painfully large gray areas in the atlas testify. (Martin Enserink, Science,Vol. 336, June 2012)

From its title and external appearance, Atlas of Human Infectious Disease could be mistaken for a cytology or histology text. Once open, a geography book appears, and quickly enough, its pages reveal an essential visual almanac for anyone whose work confronts, or whose interests include, infectious diseases. This book shows the pictures we often seek but have difficulty finding: those that answer the question, “Where?” For a less common disease, where has it been reported? For a more common one, where is it not controlled? Part atlas and part disease manual, this work reflects an intensive effort by 120 contributors and reviewers, assuring the user of a broad, collective expertise. Oxford tropical disease researchers Heiman F.L. Wertheim and Peter Horby and ProMED mail co-founder John P. Woodall are the lead editors. The book provides taxonomic consistency with widely available sources such as the Control of Communicable Diseases Manual, and scientific articles specific to each topic were used extensively.

The first 40 of its 273 pages offer mapping of factors that influence disease transmission, clinical penetrance, and control. This portion could easily stand alone as a reference for a broad range of readers interested in any of numerous topics, from urbanization to climate to the global use of antibiotics and vaccines. The bulk of the book is a compendium of 2-page, clinical–epidemiologic summaries of human infections, each having the same leftpage map and right-page text layout. An equal-area world map is the usual template for incidence and endemicity displays, whereas regional maps and insets are used as needed; however, no section or entry on geographically diverse, health care–associated bacterial infections is included. The entries do include selected opportunistic infections, but apart from agents of general public health importance such as bloodborne viruses, health care–associated infections are not given particular attention. On the other hand, doing so could easily have doubled the volume of the book.

Overlays on the maps are simple and usually contrast well with the core scheme to readily show relationships. For example, the outlining of vector distributions does not interfere with the use of solid colors to map disease occurrence. Where overlays would not work as well, the page includes one or more parallel maps, which may show inverse relationships such as immunization coverage versus disease incidence. The book indirectly begs for better surveillance by depicting large gray areas marked “No Data”; even the most developed countries often fail to escape this distinction. In fact, the type of passive reporting that supplied map data for some diseases leaves one wondering: is it “no data” or “no disease”?

Clever adjustments for reporting bias were made in some cases, though the nature of source data too often prohibits any valid attempt. Likewise, dependence on political borders to outline geographic distribution usually prohibits depiction of spatial density. When a disease has worldwide distribution, that fact is not usually evident in the map, which instead focuses on high-risk areas. This method is appropriate and reinforces the need to use the map and text pages together.

Purchasers are provided a code to download the book in a digital format. Downloading is a fast and easy process, as is using the electronic version of the book itself. A single click on any topic or figure in the navigation pane takes the reader directly to the page desired. The resolution is excellent, and one can either scroll or page up and down through each entry.

The Atlas clearly sets a new standard as a geographic medicine reference and is certain to become an indispensable tool for epidemiologists and infectious diseases specialists. The editors hope it will also encourage the reporting of infectious diseases worldwide, which may well become its most important role. (Bruno P. Petruccelli, Retired, Medical Corps, US Army)

“This is an excellent resource if one is looking for maps with verifiable sources of the distribution of infectious diseases and their drivers.”  (Doody’s, ۷ September 2012) 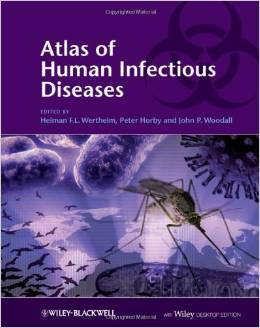