There is no substitute for direct patient–physician interaction, but with Photographic Atlas of Pediatric Disorders and Diagnosis you can explore the full range of presenting symptoms in infants, children, and young adults through images of common and unusual presenting features for over 300 pediatric disorders. Many of these patient images have never been published anywhere in the world; all, are unique.

Let the power of this atlas enhance your visual diagnostic skills!

“I recently received a copy of the book, Photographic Atlas of Pediatric Disorders and Diagnosis, which has not left my desk and which I have looked at every day. It is an outstanding contribution to our literature, beautifully illustrated and with very focused and helpful text accompanying each picture or group of pictures. Additionally, the quality of the paper is superb and the size of the book is one that surely will be appreciated by every reader or potential reader.” – N. Paul Rosman, MD

The Salimpours provide a resource for those of us who are visual learners in the Photographic Atlas of Pediatric Disorders and Diagnosis (Ralph R., Pedram and Pejman Salimpour).

This book will serve those who see children from low income countries (LICs). It happened so often to me at UCLA – students and physicians returned from a medical mission to a LIC and told me they had cared for children with disorders they had never seen before, or in extremes they could not have contemplated. I wanted a source of pictures that would expose them to these conditions and this is it.

Some atlases provide visual documentation for specific subspecialties, but the Salimpours designed their Photographic Atlas to be inclusive and organized it for easy reference. The complete contents of the physical volume are available on-line, therefore providing searchable access on your computer or hand-held device, and moving this visual learning and reference technology into the 21st century.

Not all of the topics in the Photographic Atlas are limited to LICs, and some represent disorders seen more routinely in pediatric populations in countries at all income levels.  But even for these more routine topics, the photographs are comprehensive and striking.

The book provides the backstory to this compendium. Photographer and first author, Ralph Salimpour, was born in Iran in the 1930s to a 15 year-old mother. He survived a number of childhood diseases, including ascariasis, three episodes of dysentery, malaria, tuberculosis and typhoid fever, and measles and tetanus took the lives of two of his siblings. His joint passions of pediatrics and photography continued for six decades on three continents, and he describes this Atlas as “the photo album of my career.” He and his family fled to the United States in 1979, and two of his four grown children, Pedram and Pejman, are pediatricians and co-authors with him on this book.

Armed with this backstory, we have greater insight into the material and motivation, and why it is “as personal as it is clinical.” The Salimpours intend to educate us about these disorders to assure that we recognize them and avoid unnecessary morbidity and mortality.

Many students and physicians are providing care in LICs through medical missions, or are seeing children who are new immigrants or for some other reason have not had access to adequate care. They can now be armed with the images from this book in its physical form and on-line.

Disclaimer:
I did not contribute to this book.  I was shown Dr. Ralph Salimpour’s photographs when I was executive chair of Pediatrics at UCLA and I encouraged him to write a book.  I am acknowledged, along with Dr. Lee Miller, vice chair for education in Pediatrics at UCLA for “recognizing the value of such an Atlas in the armamentarium of the medical educator and of the physician.” The Salimpours thanked me with a copy of the book. 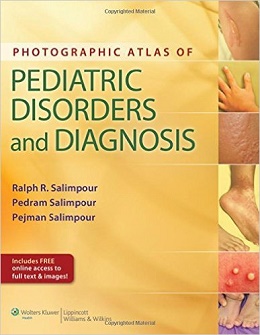