The classic guide to applying, performing and interpreting EP tests, updated for the latest trends and developments in the field

For more than thirty years, Electrophysiologic Testing has been a trusted introduction to the field of electrophysiology for anyone needing to quickly acquaint themselves with basic concepts and procedures of EP testing, especially medical students, residents, nurses and technicians. At the same time, it also has served as a ready reference for medical practitioners wanting to brush up on aspects of electrophysiology, or to fine-tune their mastery of the field.

The ultimate guide to applying, performing and interpreting EP tests to optimise the treatment of patients with cardiac arrhythmias, Electrophysiologic Testing, Sixth Edition:

As with all previous editions, this updated and revised Sixth Edition was written with the goal of demystifying electrophysiology, and making it readily accessible to virtually anyone with a professional need. To that end, Drs. Fogoros and Mandrola have once again turned in a masterful performance.

Richard N. Fogoros, MD, is a former professor of medicine and a longtime practitioner, researcher and author in the fields of cardiology and cardiac electrophysiology. He currently works as a consultant to biomedical companies and as a writer.

John M. Mandrola, MD, practices cardiac electrophysiology at Baptist Health in Louisville, KY. Dr. Mandrola is the chief cardiology correspondent at theHeart.org | Medscape Cardiology. His work has appeared in numerous academic journals as well as theatlantic.com, and the Louisville Courier-Journal. He is co-author of The Haywire Heart, just released by VeloPress. 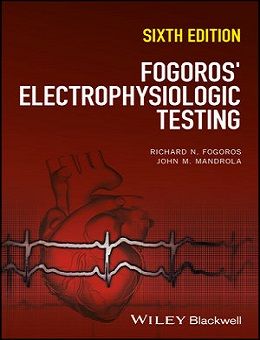