Insects represent over half of the planet’s biological diversity. This popular textbook provides a comprehensive introduction to this extraordinary diversity, and places entomology central to the theory and practice of evolutionary and ecological studies.

Fully revised, this fifth edition opens with a chapter concerning the popular side of insect studies, including insects in citizen science, zoos and butterfly houses, and insects as food for humans and animals. Key features of insect
structure, function, behaviour, ecology and classification are integrated with appropriate molecular studies.  Much of the book is organized around major biological themes: living on the ground, in water, on plants, in colonies, and as predators, parasites/parasitoids and prey insects. A strong evolutionary theme is maintained throughout.

There is major revision to the chapter on systematics and a new chapter, Insects in a Changing World, includes insect responses to, and the consequences of, both climate change and human-assisted global alterations to distributions. Updated ‘Taxoboxes’ demonstrate topical issues and provide concise information on all aspects of each of the 28 major groupings (orders) of insects, plus the three orders of non-insect hexapods. New boxes describe a worrying increase in insect threats to landscape and commercial trees (including eucalypts, palms and coffee) and explain the value of genetic data, including evolutionary developmental biology and DNA barcoding, in insect biodiversity studies.

The authors maintain the clarity and conciseness of earlier editions, and extend the profuse illustrations with new hand-drawn figures. Over 50 colour photographs, together with the informative text and an accompanying website with links to video clips, appendices, textboxes and further reading lists, encourage a deeper scientific study of insects. The book is intended as the principal text for students studying entomology, as well as a reference text for undergraduate and graduate courses in the fields of ecology, agriculture, fisheries and forestry, palaeontology, zoology, and medical and veterinary science.

“Penny Gullan and Peter Cranston have recently produced a revised fifth version of their text, maintaining much of the structure and style of the former editions, but significantly updating the information and adding a chapter on human-mediated changes in insect distributions; i.e. global climate change, globalized commerce, and invasive insects. . . The book is supported by a companion website that includes Powerpoint versions of all illustrations and PDFs of all tables, thereby aiding lecture development. By significantly updating the information presented in the book, the authors amply illustrate the dynamic nature of Entomology. Insects can capture the imagination of new students, but showing those students that Entomology can sustain an exciting life is the means to recruit the ablest minds to our discipline. This book is an excellent ambassador to that pursuit.”  (Cornell University Insect Collection, ۸ December 2014)

Penny Gullan and Peter Cranston are adjunct professors in Evolution, Ecology and Genetics, in the Research School of Biology, The Australian National University, Canberra, Australia, where they conduct research on the biodiversity and systematics of Coccoidea and Chironomidae, respectively. Both maintain emeritus connections with the Department of Entomology and Nematology, University of California, Davis, USA. 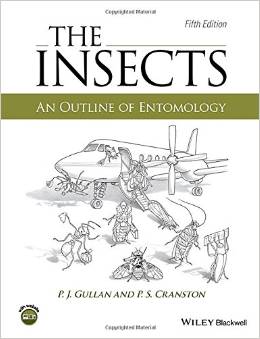