Approximately 1 million people commit suicide world-wide annually and around 10 million attempt suicide each year. Suicide is a major public health problem throughout the world, and major efforts are currently being made to help reduce these numbers. However, suicide is the result of complex interactions between a range of factors, including historical, psychological, cultural, biological, and social, and any approach to treating the problem of suicide has to consider all these factors.

This new edition of the Oxford Textbook of Suicidology and Suicide Prevention has been thoroughly updated and expanded since publication of the first edition in 2009. This comprehensive resource covers all aspects of suicidal behaviour and suicide prevention from a number of different perspectives, including its underlying religious and cultural factors; its political, social and economic causes; its psychiatric and somatic determinants; and its public health impacts. The new edition includes several new clinically focussed chapters devoted to major psychiatric disorders and their relation to suicide, including mood and anxiety disorders, substance abuse, psychosis/schizophrenia, bipolar disorder, eating disorders, and personality disorders. It also includes a fully updated section on psychometric scales used for measuring suicidal behaviour and instruments used in suicide preventative interventions.

Part of the authoritative Oxford Textbooks in Psychiatry series, this second edition will continue to serve as the key reference source for both researchers and professionals working in the areas of suicidology and suicide prevention, including psychiatrists, clinical psychologists, public health specialists, and neuroscientists.

Danuta Wasserman, Professor of Psychiatry and Suicidology, Karolinska Insitutet (KI), Stockholm, Sweden
Danuta Wasserman is Professor in Psychiatry and Suicidology at Karolinska Institutet (KI), and the Founding Head of the National Centre for Suicide Research and Prevention of Mental Ill-Health (NASP). Since 1995, she has also been the Director of the WHO Collaborating Centre for Research, Methods Development and Training in Suicide Prevention, and an expert advisor to the WHO office in Copenhagen and Geneva. Former President of the European Psychiatric Association, she is Honotaty President of the Swedish-Estonian Institute of Suicidology.
Professor Wasserman has received a number of research awards for her work, such as the Stengel Award, the American Foundation for Suicide Prevention: Distinguished Research Award, the Hans-Rost Prize, and the Nordic Public Health Prize.
قیمت : 3000 تومان
لینک کوتاه : https://bookbaz.ir/?p=285197
نویسنده : Danuta Wasserman
ناشر : Oxford University Press; 2nd edition
سال انتشار : 2021
زبان کتاب : انگلیسی
نوع فایل : PDF
تعداد صفحات : 851
(ISBN) شابک : 0198834446
قیمت کتاب درآمازون : $147.33
حجم فایل : 10 MB 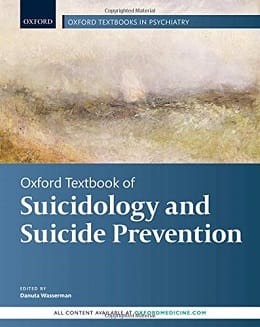