The main goals in any forensic skeletal analysis are to answer who is the person represented (individualization), how that person died (trauma/pathology) and when that person died (the postmortem interval or PMI). The analyses necessary to generate the biological profile include the determination of human, nonhuman or nonosseous origin, the minimum number of individuals represented, age at death, sex, stature, ancestry, perimortem trauma, antemortem trauma, osseous pathology, odontology, and taphonomic effects―the postmortem modifications to a set of remains.

The Manual of Forensic Taphonomy, Second Edition covers the fundamental principles of these postmortem changes encountered during case analysis. Taphonomic processes can be highly destructive and subtract information from bones regarding their utility in determining other aspects of the biological profile, but they also can add information regarding the entire postmortem history of the remains and the relative timing of those effects. The taphonomic analyses outlined provide guidance on how to separate natural agencies from human-caused trauma. These analyses are also performed in conjunction with the field processing of recovery scenes and the interpretation of the site formation and their postdepositional history.

The individual chapters categorize these alterations to skeletal remains, illustrate and explain their significance, and demonstrate differential diagnosis among them. Such observations may then be combined into higher-order patterns to aid forensic investigators in determining what happened to those remains in the interval from death to analysis, including the environment(s) in which the remains were deposited, including buried, terrestrial surface, marine, freshwater, or cultural contexts.

While the book is primarily focused upon large vertebrate and specifically human skeletal remains, it effectively synthesizes data from human, ethological, geological/paleontological, paleoanthropological, archaeological artifactual, and zooarchaeological studies. Since these taphonomic processes affect other vertebrates in similar manners, The Manual of Forensic Taphonomy, Second Editionwill be invaluable to a broad set of forensic and investigative disciplines.

James T. Pokines, Ph.D., D.-.A.B.F.A., is an Associate Professor in the Forensic Anthropology Program, Department of Anatomy and Neurobiology, Boston University School of Medicine. He is also the Forensic Anthropologist for the Office of the Chief Medical Examiner, Boston, Commonwealth of Massachusetts, and analyzes all unknown bone cases in that state. 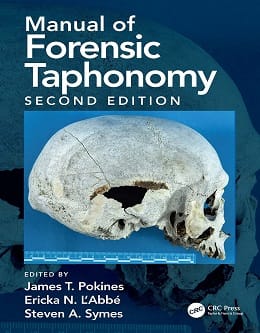