Dinosaurs, however toothy, did not rule the earth—and neither do humans. But what were and are the true potentates of our planet? Insects, says Scott Richard Shaw—millions and millions of insect species. Starting in the shallow oceans of ancient Earth and ending in the far reaches of outer space—where, Shaw proposes, insect-like aliens may have achieved similar preeminence—Planet of the Bugs spins a sweeping account of insects’ evolution from humble arthropod ancestors into the bugs we know and love (or fear and hate) today.

Leaving no stone unturned, Shaw explores how evolutionary innovations such as small body size, wings, metamorphosis, and parasitic behavior have enabled insects to disperse widely, occupy increasingly narrow niches, and survive global catastrophes in their rise to dominance. Through buggy tales by turns bizarre and comical—from caddisflies that construct portable houses or weave silken aquatic nets to trap floating debris, to parasitic wasp larvae that develop in the blood of host insects and, by storing waste products in their rear ends, are able to postpone defecation until after they emerge—he not only unearths how changes in our planet’s geology, flora, and fauna contributed to insects’ success, but also how, in return, insects came to shape terrestrial ecosystems and amplify biodiversity. Indeed, in his visits to hyperdiverse rain forests to highlight the current insect extinction crisis, Shaw reaffirms just how crucial these tiny beings are to planetary health and human survival.

In this age of honeybee die-offs and bedbugs hitching rides in the spines of library books, Planet of the Bugs charms with humor, affection, and insight into the world’s six-legged creatures, revealing an essential importance that resonates across time and space.

“Shaw’s detailed investigation places the broad classifications of ancient and modern insects in the context of their development, and, by showing specifics of coevolution, he makes a strong case for valuing the interconnectedness of all life.”

“Shaw does a wonderful job of describing how important insects are by giving a chronological account of their terrifically successful and diverse evolution. . . . Humorous and provocative. . . . The insects are more numerous, more speciated, more diverse, and historically more influential than we, and despite all the detrimental changes we have wrought especially over the past couple of centuries, it is the insects’ planet, and my bet is that it will remain so even if the humans don’t last on it.”

“Accessible and entertaining . . . . Shaw’s unusual perspective on life can be delightfully askew: why, he asks, do we give our loved ones flowers instead of stink bugs, when many of the latter are just as colourful and sweet-smelling? Overall, readers should come away with a deeper appreciation of insect diversity, and a fresh regard for evolution’s sweep.”

“The 165-million-year-long era when dinosaurs roamed the Earth shouldn’t be called the Age of Reptiles. Nor should the era that followed, which extends to the present, be christened the Age of Mammals. Just ask an insect guy. In Planet of the Bugs, Shaw . . . makes a good case that Earth has long been dominated by insects. . . . In a chapter-by-chapter march through time, [he] engagingly chronicles the evolutionary innovations that have rendered insects so successful. . . . Drawing from field studies and the fossil record, Planet of the Bugs is a fascinating look at the rise and proliferation of creatures that shape ecosystems worldwide.”

“Shaw tackles evolution from the perspective of the insects, a refreshing and insightful change from the usual human-centered view, and argues convincingly that insects have diversified and thrived more successfully than any other animal on Earth. . . . Shaw’s coherent, precise writing is complemented by pleasing illustrations of insects and fossils. . . . A readable, compact introduction for the layperson.”

“Behind the witty prose lies a serious message. The triumph of insects is inseparably connected to the success and progression of almost all life on the planet in some way or another. Insects have coevolved with plants and animals and can act as friend or foe, spanning all lifestyles from predator to parasite to pollinator. So entangled are they in the fate of many cornerstone species that the decline of insect groups has put many ecosystems at risk of collapse, including several that are crucial for human survival. We may be somewhat flippant about their influence on our own evolutionary history, but we can be sure that the demise of insects would have catastrophic consequences for our future. . . . Eloquent and very knowledgeable, Shaw is also, perhaps more importantly when it comes to a good read, a storyteller capable of painting a rich portrayal of prehistoric lands filled with weird and wonderful bugs and beasts. His captivating and comical writing had me marveling at detailed accounts of giant dragonfly-like beasts with two-foot wingspans, and laughing out loud at aptly named sections such as ‘Secretive societies with an anal fixation.’ I am not, it is fair to say, a lover of things that creep and crawl, but looking through Shaw’s eyes, I found myself appreciating their place in my world a little more. Moreover, as he made me realize, it is not my world at all, but theirs.”

“Charting a somewhat different course from that of more conventional books on insects, Shaw takes readers on a grand tour through the vast expanse of geologic time.  From the beginnings of life on Earth through modern times, he outlines the origin and evolution of major taxonomic groups as chronicled in the fossil record. . . . The book stresses their global importance as drivers of evolutionary change in a wide array of plants and animals. . . . Recommended.”

“Shaw has been collecting bugs since he was four. Now a professor of entomology at the University of Wyoming, he shares his passion for these creatures and their cosmological significance in Planet of the Bugs. The scope of this work is immense. . . . Packed with intriguing trivia. . . . Shaw boggles the reader with his enthusiasm and expertise, and reveals a playful side. Among his many encyclopedic turns, he waxes philosophical and indulges in metaphor and even humor, resulting in a surprisingly accessible and entertaining read. A love of bugs is not required. Discover: An impassioned view of insect evolution and the awesome implications of bugs for all life on earth.”

“[One of] the best popular science books of 2014: biological sciences.”

“Shaw is a masterful guide to insects’ intimidating diversity and complicated history. . . . He is particularly effective at dispelling misconceptions, pointing out that, despite what exterminators might suggest, most insects are not pests. . . . Science-minded readers will appreciate how alternative, competing hypotheses are presented for various unresolved questions, like why insects first evolved flight and the causes of mass extinctions. In the end, Planet of the Bugs succeeds as an accessible introduction to the evolutionary history of the organisms that truly dominate our planet. (Hint: It’s not us.).”

“Shaw, our erudite and passionate guide, makes bugs the star. Give him a few hours and you may briefly escape our species bias. . . . Shaw has . . . done justice to the claim in his title, Planet of the Bugs.”

“A fascinating peek under the mantle of the ‘known world,’ revealing a minute, clicking-and-whirring mechanism manned largely by bugs. I learned SO much from this book.”

(Daniella Martin author of “Edible: An Adventure into the World of Eating Insects”)

“Shaw’s Planet of the Bugs is the most eloquent and passionate book on insects in a generation.”

(Mark W. Moffett, Smithsonian Institution author of “Adventures among Ants: A Global Safari with a Cast of Trillions”)

“A detailed and intriguing journey through the evolution of insects, following their development from single-celled organisms through to the elaborate and fascinating beasts that now dominate almost every niche on the planet. Shaw writes in an engaging style that is almost that of thinking out loud, conversing with his reader much as he presumably would over a cup of coffee, and he makes evolution a tangible process, exposing some of the more peculiar and less well-known features of our six-legged relatives.”

“A very enjoyable read. Planet of the Bugs is packed full of really great information from a unique ‘buggy’ perspective and is done with humor and fun.” 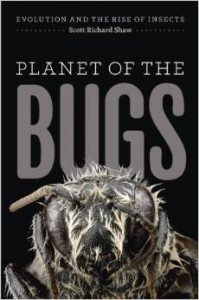