Co-published with the Arthroscopy Association of North America, The Shoulder: AANA Advanced Arthroscopic Surgical Techniques is a comprehensive technique-based book that presents the latest diagnostic and reconstructive techniques in arthroscopic surgery for the shoulder.

Each expert contributor was chosen for his or her expertise for a specific topic related to The Shoulder, so the reader benefits by the highest quality and treatment recommendations to provide state-of-the-art care to his or her patient.

“This series does a wonderful job of blending the didactic format of an efficiently written and organized book with the bonus of online videos that enable users to witness a master performing the techniques. The format optimizes learning and enables readers to improve their skills regardless of their baseline knowledge. The authors have done a remarkable job of bringing together the best of the best in the field of shoulder arthroscopy to share their knowledge and skills. This is a superb offering from the best in the world on arthroscopic education. It is a must addition to the institutional and personal library.”

Jeffrey S. Abrams, MD is a cum laude graduate from Rensselaer Polytechnic Institute located in Troy, New York, and he graduated from medical school from the State University of New York at Syracuse. He completed his surgical internship in Santa Barbara, California and his orthopedic residency at Thomas Jefferson University Hospital in Philadelphia, Pennsylvania. He completed a shoulder fellowship with Dr. Richard J. Hawkins at the University of Western Ontario in London, sports medicine fellowship in Aspen, Colorado, and a sports medicine fellowship with Dr. James Andrews in Columbus, Georgia.
Dr. Abrams is a Clinical Professor at Seton Hall University, School of Graduate Medicine in South Orange, New Jersey and an attending surgeon at the University Medical Center of Princeton in New Jersey. He has served as the president of the American Shoulder and Elbow Surgeons and is currently the president of the Arthroscopy Association of North America. He has served on the boards for the Orthopedic Learning Center in Rosemont, Illinois and Princeton Orthopedic Associates, serving as a managing partner.
Dr. Abrams has been awarded the Educator of the Year in New Jersey and was initiated into the New Jersey Inventors Hall of Fame as the Innovator of the Year for patent designs for arthroscopic suture anchors. He has lectured over 800 times in the United States and internationally, has published more than 60 scientific articles and book chapters, and has edited 2 textbooks, Arthroscopic Rotator Cuff Surgery: A Practical Approach to Management and Management of The Unstable Shoulder: Arthroscopic and Open Repairs. He serves on the editorial staff for 5 orthopedic publications and is currently a co-editor of the The Shoulder: AANA Advanced Arthroscopy Surgical Techniques Volume, as well as a series editor for the Second Edition.
He serves as a consultant to Princeton University, College of New Jersey, Mercer County Community College, International Management Group, and professional and collegiate athletes. He combines an academic with a community practice in Princeton, New Jersey. 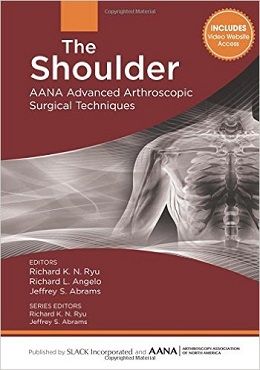