The Fourth Edition of Knobil & Neill continues to serve as a reference aid for research, to provide the historical context to current research, and most importantly as an aid for graduate teaching on a broad range of topics in human and comparative reproduction. In the decade since the publication of the last edition, the study of reproductive physiology has undergone monumental changes. Chief among these advances are in the areas of stem cell development, signaling pathways, the role of inflammation in the regulatory processes in the various tissues, and the integration of new animal models which have led to a greater understanding of human disease. The new edition synthesizes all of this new information at the molecular, cellular, and organismal levels of organization and present modern physiology a more understandable and comparative context.

“Each successive edition has grown with the exciting new information generated in the interim. The third edition is no exception. …These volumes are clearly designed for students of reproductive physiology and cover almost every imaginable topic. …they certainly would be an invaluable adjunct to understanding the physiology that underlies clinical questions in reproductive medicine. These are the volumes that every graduate student or postdoctoral fellow in reproduction should have and probably would love to receive for Christmas. …every university, medical school and research institute should have these volumes in their libraries.”–V. Daniel Castracane, Foundation for Blood Research, Scarborough, ME for TRENDS IN ENDOCRINOLOGY & METABOLISM (2006)

Dr. Tony M. Plant studied for his PhD with Dr. Richard P. Michael in London and completed his postdoctoral training with Dr. Ernst Knobil in Pittsburgh in 1978. Since then, his research has been continuously funded by the National Institutes of Health (NIH) to study non-human primate models in order to better understand human reproduction. Dr. Plant has been particularly interested in the neurobiology of puberty onset, the neuroendocrine control of the menstrual cycle and testis, the endocrine control of spermatogenesis and, most recently, in the cell and molecular biology underlying spermatogonial differentiation. From 1985 until 2013 he served as Director of a multi-investigator, NIH-funded Center to study the physiology of reproduction, and he served as President of the International Neuroendocrine Federation (INF) from 2007-2010. He is a Foreign Fellow of the Pakistan Academy of Sciences and an honorary member of the Polish Neuroendocrine Society. Dr. Plant is also the recipient of the INF 2014 Geoffrey Harris Lecture.

Dr. Anthony J. Zeleznik received his PhD in Physiology from the University of Michigan in 1975. His doctoral work, conducted under the direction of Dr. A. Rees Midgley, Jr., was the first to document that a principal action of follicle stimulating hormone in the ovary was to induce LH receptors on granulosa cells, an action that enables the follicle to ovulate and luteinize in response to LH. Following the completion of postdoctoral work under the direction of Drs. Jesse Roth and Griff Ross at the National Institutes of Health, Dr. Zeleznik joined the Department of Physiology at the University of Pittsburgh in 1978, where he began a systematic investigation on the physiological and cellular control mechanisms that govern the menstrual cycle in higher primates. Dr. Zeleznik served on the Editorial Boards of Endocrinology, Biology of Reproduction, The American Journal of Physiology and the Journal of Endocrinology, as well as having been appointed as a member of three NIH Study Sections. 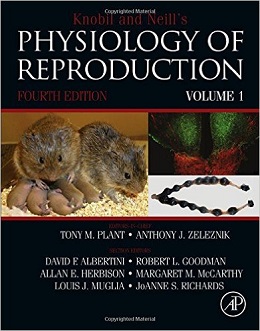