The interdisciplinary field of regenerative medicine holds the promise of repairing and replacing tissues and organs damaged by disease and of developing therapies for previously untreatable conditions, such as diabetes, heart disease, liver disease, and renal failure. Derived from the fields of tissue engineering, cell and developmental biology, biomaterials science, nanotechnology, physics, chemistry, physiology, molecular biology, biochemistry, bioengineering, and surgery, regenerative medicine is one of the most influential topics of biological research today.

Derived from the successful Principles of Regenerative Medicine, this volume brings together the latest information on the advances in technology and medicine and the replacement of tissues and organs damaged by disease. Chapters focus on the fundamental principles of regenerative therapies that have crossover with a broad range of disciplines. From the molecular basis to therapeutic applications, this volume is an essential source for students, researchers, and technicians in tissue engineering, stem cells, nuclear transfer (therapeutic cloning), cell, tissue, and organ transplantation, nanotechnology, bioengineering, and medicine to gain a comprehensive understanding of the nature and prospects for this important field.

Anthony Atala, M.D., is the Director of the Wake Forest Institute for Regenerative Medicine, and the W.H. Boyce Professor and Chair of the Department of Urology at Wake Forest University. Dr. Atala is a practicing surgeon and a researcher in the area of regenerative medicine. His current work focuses on growing new human cells, tissues and organs.Dr. Atala works with several journals and serves in various roles, including Editor-in-Chief of Current Stem Cell Research and Therapy, and Therapeutic Advances in Urology; as Associate Editor of the Journal of Tissue Engineering and Regenerative Medicine, The Journal of Rejuvenation Research, Nanotechnology in Engineering and Medicine, Gene Therapy and Regulation, and Current Reviews in Urology; as Executive Board Member or Section Editor of the journal Tissue Engineering and International Journal of Artificial Organs, and as Editorial Board member of the International Journal of Stem Cells, Stem Cell Review Letters, Expert Opinion on Biological Therapy, Biomedical Materials, Recent Patents on Regenerative Medicine, the Journal of the American College of Surgeons, the Journal of Urology, BMC Urology, Urology, and Current Opinion in Urology.

Dr. Atala is a recipient of the US Congress funded Christopher Columbus Foundation Award, bestowed on a living American who is currently working on a discovery that will significantly affect society, and the Gold Cystoscope Award for advances in his field. Dr. Atala was named by Scientific American as a Medical Treatments Leader of the Year for his contributions to the fields of cell, tissue and organ regeneration. In 2006, he was named by Fast Company magazine as one of 50 people who “will change how we work and live over the next 10 years. Dr. Atala’s work was listed as Discover Magazine`s Number 1 Top Science Story of the Year in the field of medicine, and as Time Magazine’s top 10 medical breakthroughs of the year in 2007. A Time Magazine poll ranked Dr. Atala as the 56th most influential person of the year in 2007. Esquire Magazine in 2008 named Dr. Atala one of the 75 most influential persons of the 21st century. Fast Company Magazine named Dr. Atala one of 100 Most Creative People in Business in 2009. Dr. Atala was featured in U.S. News & World Report as one of “14 Medical Pioneers Who Aren’t Holding Back.”

Dr. Atala has led or served several national professional and government committees, including the National Institutes of Health working group on Cells and Developmental Biology, and the National Institutes of Health Bioengineering Consortium. He is currently an NIH “Quantum Grant” awardee. Dr. Atala heads a team of over 250 physicians and researchers. Ten applications of technologies developed in Dr. Atala’s laboratory have been used clinically. He is the editor of nine books, including Minimally Invasive Urology, Methods of Tissue Engineering, Principles of Regenerative Medicine, and Foundations of Regenerative Medicine, and has published more than 300 journal articles and has applied for or received over 200 national and international patents. 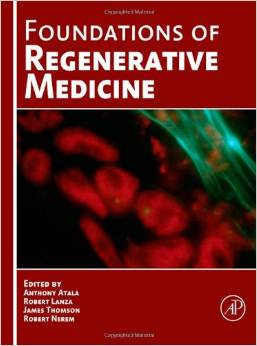