Visual Essentials of Anatomy & Physiology combines a visual approach with a modular organization to deliver an easy-to-use and time-efficient book that uniquely meets the needs of today’s students—without sacrificing the coverage of A&P topics required for careers in nursing and other allied health professions. This book is geared toward students enrolled in a one–semester A&P course.

Frederic (Ric) H. Martini received his Ph.D. from Cornell University in comparative and functional anatomy for work on the pathophysiology of stress. He is currently an affiliated faculty member of the University of Hawaii at Manoa. Dr. Martini is a President Emeritus of the Human Anatomy and Physiology Society (HAPS) after serving as President-elect, President, and Past-president over 2004-2007. He was a member of the HAPS committee that established the course curriculum guidelines for A&P. He is the lead author of nine undergraduate texts on anatomy and physiology or anatomy, all published by Pearson.

William C. Ober received his undergraduate degree from Washington and Lee University and his M.D. from the University of Virginia. While in medical school, he also studied in the Department of Art as Applied to Medicine at Johns Hopkins University. After graduation, Dr. Ober completed a residency in Family Practice and later was on the faculty at the University of Virginia in the Department of Family Medicine. He is currently an Affiliate Professor of Biology at Washington and Lee University. Dr. Ober has illustrated every Martini book in every edition.

Edwin F. Bartholomew received his undergraduate degree from Bowling Green State University in Ohio and his M.S. from the University of Hawaii. Mr. Bartholomew has taught anatomy and physiology and a wide variety of other science courses (from botany to zoology) at both the secondary and undergraduate levels at historic Lahainaluna High School, the oldest high school west of the Rockies, and Maui Community College. Mr. Bartholomew is a member of the Human Anatomy and Physiology Society (HAPS), the National Association of Biology Teachers, the National Science Teachers Association, the Hawaii Science Teachers Association, and the American Association for the Advancement of Science. Working with Dr. Martini, he has coauthored five undergraduate texts on anatomy and physiology, all published by Pearson.

Judi L. Nath is a biology professor at Lourdes College, where she teaches anatomy and physiology, pathophysiology, medical terminology, and pharmacology.  She received her Bachelor’s and Master’s degrees from Bowling Green State University and her Ph.D. from the University of Toledo. She is a multiple recipient of the Faculty Excellence Award, granted by Lourdes College to recognize her effective teaching, scholarship, and community service. She is active in many professional organizations, notably the Human Anatomy & Physiology Society (HAPS), where she has served several terms on the board of directors.  Working with Dr. Martini, she has coauthored four undergraduate texts on anatomy and physiology, all published by Pearson. 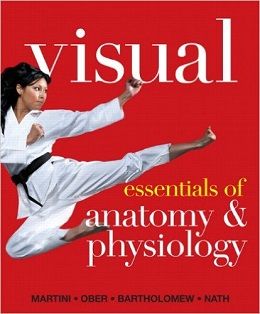