The study of bacterial spores spans biosecurity to ecology

The first articles describing the sporulation process were published by Robert Koch and Ferdinand Cohn in the late 19th century. Although most of the work accomplished in the past 50 years has focused on the model organism Bacillus subtilis, more recent work significantly expanded the scope of sporulation research to integrate medically relevant spore pathogens, such as B. anthracis and Clostridium difficile, as well as investigations of the ecology of spore-forming species. This new direction is supported by an explosion of novel techniques that can also be applied to nonmodel organisms, such as next-generation sequencing, metagenomics, and transcriptomics.

The Bacterial Spore provides a comprehensive series of reviews of the major topics in spore biology that represent intensive, cutting-edge spore research. Editors Adam Driks and Patrick Eichenberger assembled chapters written by a team of diverse and multidisciplinary experts in biodefense and microbial forensics to produce an overview of topics of spore research, such as spore molecular biology, bioremediation, systems biology, issues in biodefense, and the challenge of food safety that is accessible to any reader, regardless of expertise. The Bacterial Spore also encompasses the diversity of spore research, which will appeal to those seeking to broaden their knowledge.

The Bacterial Spore is a reference for a wide range of readers, including geneticists, cell biologists, physiologists, structural and evolutionary biologists, applied scientists, advanced undergraduate and graduate students, and nonresearchers, such as national security professionals.

“The Bacterial Spore: From Molecules to Systems is an ambitious effort at consolidating this body of research in a way that highlights the biological diversity of bacterial spore formers, their industrial and medical applications, and fundamental mechanistic insights gained from their study in a way that is accessible to both the novice and expert microbiologist.” ─ Kumaran S. Ramamurthi, Ph.D., Investigator, National Cancer Institute, National Institutes of Health

Adam Driks is a Professor in the Department of Microbiology and Immunology in the Stritch School of Medicine at Loyola University Chicago. He received his Ph.D. from Brandeis University, in the laboratory of Dr. David DeRosier, where he analyzed the composition and assembly of bacterial flagella. He performed Postdoctoral research in the laboratory of Dr. Richard Losick at Harvard University, where he initiated his work on assembly and composition of the Bacillus spore coat.

Patrick Eichenberger is an Associate Professor of Biology in the Center for Genomics and Systems Biology at New York University. He obtained his Ph.D. from the University of Geneva, where he studied molecular mechanisms of transcriptional activation in the laboratory of Dr. Hans Geiselmann. He started his work on spore formation in the laboratory of Dr. Richard Losick at Harvard University. He established his own laboratory in 2004 at New York University, where he studies global gene transcription networks and mechanisms of spore coat assembly in Bacillus subtilis and related bacteria. 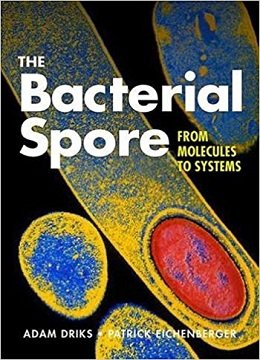