Alzheimer Disease Sourcebook, 5th Edition, provides updated information about causes, symptoms, and stages of AD and other forms of dementia. It discusses the structure of the brain, how it changes with age, and the cognitive decline and degeneration that occur in dementia. Facts about testing, symptoms, clinical trials, and recent research efforts are also included, along with information about legal, financial, and medical planning and coping strategies for caregivers

Part I: Facts about the Brain and Cognitive Decline presents information about healthy brain function and changes in cognitive function and memory that occur during aging.

Part II: Alzheimer Disease (AD): The Most Common Type of Dementia explains the signs, symptoms, and diagnostic stages of AD; the factors that affect its development; and facts about younger-onset AD, which affects people under the age of 65.

Part III: Other Dementia Disorders identifies types, signs, and symptoms of dementia other than AD.

Part IV: Recognizing, Diagnosing, and Treating Symptoms of AD and Dementias discusses the tools used to diagnose AD, the interventions used to manage the symptoms, and current research and clinical trials.

Part V: Living with AD and Dementias describes strategies for maintaining health and wellness after a dementia diagnosis.

Part VI: Caregiver Concerns offers advice to those who care for people with AD or dementia, with tips both for dealing with the patient and for caring for oneself.

Part VII: Additional Help and Information provides a glossary of terms, a directory of relevant organizations, and a list of Alzheimer Disease Resource Centers. 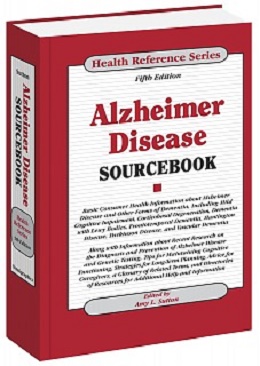